Why Does My Body Hurt After a Workout? - Lawrence Park Health and Wellness

You know that feeling a day or two after a really tough or new workout? The one where everything just hurts? Well that pain has a name! You might be suffering from something called DOMS (aka Delayed Onset Muscle Soreness).

DOMS is muscle pain that typically begins approximately 12-24 hours after a particularly difficult or new workout. The pain tends to peak between 24-72 hours after the offending exercise routine and can sometimes last up to 1 week!

Why does DOMS happen?

For many years it was believed that a build-up of lactic acid was the cause of this post-workout pain; however, more recently this has been proven untrue. Although there is still some controversy and unknown variables surrounding the exact mechanism of DOMS, the current general consensus is that it is related to the healing of microtears or microscopic damage to your muscle tissues that occur during eccentric contractions. Eccentric contractions are what happen when your muscle is both contracting and lengthening at the same time (for example, when bringing your arm back down in a slow controlled manner during a bicep curl, you are eccentrically contracting your bicep – keeping that contraction while bringing the muscle into a position of length).

How do I make it feel better?

Again, for this, the evidence is conflicting. Mostly, just giving your body some time to heal will help you out. This isn’t to say you should go sit on the couch and wait it out! Out of all of the poor evidence on treatment for DOMS, exercise has been found as one of the most effective methods (MOTION IS LOTION!). Instead of another gruelling workout right off the bat, try some lighter movements like a light jog, some light yoga and stretching for a few days before getting back into it. Things like ice or an Epsom salt bath might help speed things along as well but the evidence is poor on these. Make sure you are always hydrating!

Can I prevent DOMS?

While DOMS may not be entirely prevented unless you just don’t move ever (in that case, you’ll likely end up with worse problems than just some good ol’ DOMS), there are some ways to reduce the severity. When you’re starting a new exercise, make sure you progress slowly into it to give your muscles time to react to their new demands. Some evidence shows a proper warm-up and cool down might also be beneficial in prevention.

What if it isn’t DOMS?

If the pain occurs DURING the workout, if the pain persists beyond 1 week, or it is preventing you from doing your activities of daily living, then it might be something else. Make sure to seek care if things aren’t progressing the way you think they should. Of course, you always need to trust your own body and seek care if something doesn’t feel right. 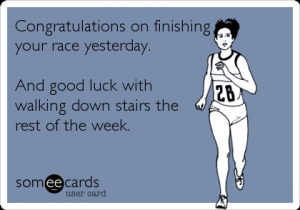